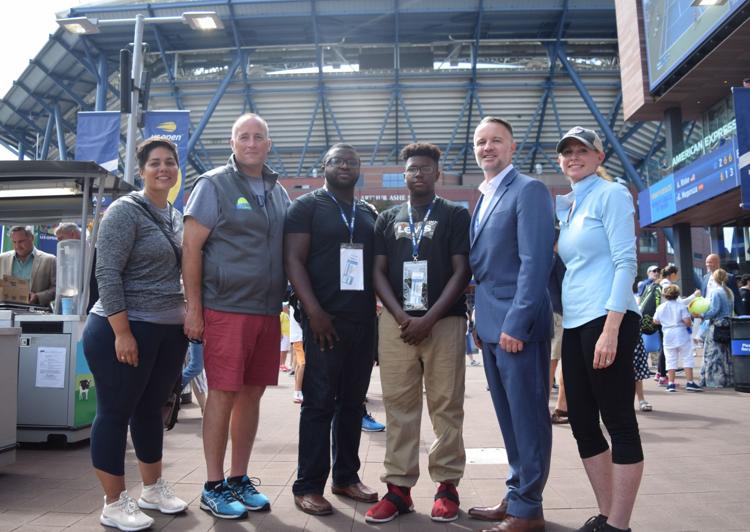 NEW YORK >> Pottstown is going places. And for more than a few young members of the community, they have tennis to thank.

Xzavier Williams, a 15-year-old Pottstown High School 10th grader, was some place special on Tuesday when he took in the biggest tournament in the world, the U.S. Open, in Flushing, N.Y.

Williams wasn’t just one of the tens of thousands enjoying matches at the USTA Billie Jean King National Tennis Center – he holds a unique distinction as one of the USTA Foundation’s NJTL Character Award recipients.

The U.S. Open is also celebrating the 50th anniversary of the USTA National Junior Tennis and Learning (NJTL) network. Founded in 1969 by Arthur Ashe, Charlie Pasarell, and Sheridan Snyder, the NJTL is a nationwide group of community tennis organizations seeking to develop the character of young people through tennis and education.

Greater Pottstown Tennis & Learning, under the leadership of Executive Director Kerriann Herdelin, is one of the NJTL’s strongest organizations in the nation and has shown significant growth in the last 3-4 years. As one of the USTA Foundation’s Capacity Building programs, GPTL receives direct funding from the USTA Foundation, which has shown special interest in seeing the organization thrive in Pottstown.

GPTL’s rapid growth has occurred on and off the court: its home courts at the Maple Street Park in Pottstown were revitalized in April through a grant from the USTA Foundation while the GPTL has opened an educational wing at the Pottstown Integrated Wellness Complex (PIWC) at 724 N. Adams Street, adjacent to the Pottstown High School and Middle Schools.

“Tennis isn’t something that you might think of naturally with Pottstown, but we’re trying to get the word out that there is so much funding and people that want to help and use the vehicle of tennis to better their lives,” Herdelin said. “There are so many opportunities with tennis, I can’t stress that enough.”

The GPTL’s programs have been a positive resource for more than a thousand Pottstown area youth, especially Xzavier Williams.

Williams’ NJTL Character Award included a $5,000 scholarship from the USTA Foundation to be put toward tennis development and education expenses such as academic tutoring, SAT classes, college prep courses and attending the Open with his father.

“Usually when I’m on my way to a clinic, I’m thinking, ‘This is the best part of my week,’” Williams said.

Williams was first introduced to tennis at a GPTL free summer camp when he was 9.

“After that year I just decided tennis was the sport I wanted to play,” he said Tuesday standing in front of Louis Armstrong Stadium. “After that I started playing more and more often.”

His opportunities were opened by a GPTL Scholarship through a grant from Pottstown Area Health & Wellness Foundation.

His trajectory hasn’t been without its setbacks: in seventh grade he suffered knee injuries, and a year later was hospitalized for two weeks with pain in his hips, knees and chest. Williams was diagnosed with Rhabdomyolysis, a rare condition where a breakdown of muscle tissue occurs and releases a damaging protein into the blood, which can result in kidney damage.

As he recovered, tennis and the GPTL helped supply Williams with the motivation to get back out on the court.

“They helped me a lot just getting off the couch and back into tennis because I couldn’t play for a while,” Williams said.

Now, getting to play is a highlight of his week.

“It’s helped me get active,” he said. “I used to barely be able to run. My asthma was really bad, but it’s helped my endurance.”

His parents, Mike and Jacqueline, have seen Xzavier thrive through tennis.

“His mom and I are extremely impressed with the way he’s been able to overcome his medical issues and use tennis as a propellent to get better,” Mike Williams said Tuesday at the U.S. Open. “That’s the one thing he was most upset about being in the hospital, not being able to play tennis. His mom and I are extremely proud of him and we’re extremely thankful for the GPTL making these programs available to him and the scholarship as well.

“It’s also helped him focus in school, in band, as an honor student. Hopefully he can continue on this path and stay successful.”

Xzavier aspires to play tennis in college, like another GPTL success story, Amier Cooper, who recently started his freshman year at Lemoyne-Owen College on a tennis scholarship.

For the Williams’, along with the rest of the GPTL’s annual bus trip, seeing the apex of the sport at the U.S. Open on Tuesday was a thrilling proposition.

He’s living proof of the impact of the USTA Foundation.

“The powerful combination of bringing tennis and education together can truly change lives,” said USTA Foundation Director of Programs & Services Rob Howland. “The USTA Foundation has about 263 organizations – Pottstown being one of them – that annually serves about 164,000 kids.

“Pottstown has really grown over the last 3-4 years under the leadership of Kerriann and her board. We’ve invested a lot in them and it’s nice to see that investment paying off with the Maple Street courts being re-done, the other opportunities coming down the road.”

That growth continued this week with the introduction of the Pottstown Middle School boys and girls tennis teams, headed by GPTL Director of Education Chris Herdelin.

Now, the next generation of Pottstown area kids might find their own path through tennis, which might just take them to some amazing places, too.